Large group of starlings impresses by swirling through the air  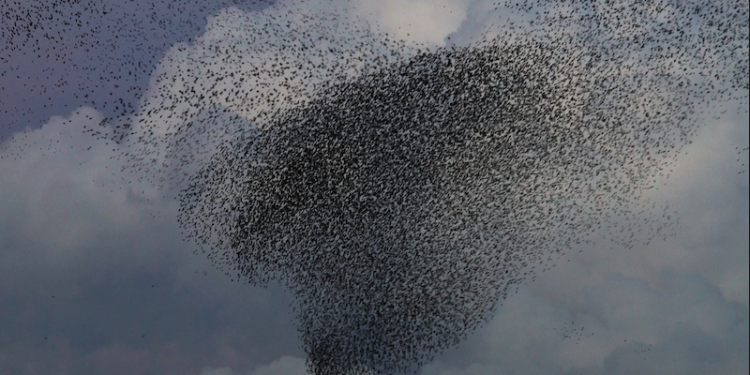 The two adventurous friends Sophie and Liberty always wanted to go to the small island that is lying just off the coast of their hometown. On a drizzly, gray day, the two decide to take their canoes and cross the water. Apparently, the two cannot be stopped by the bad weather and they get into the canoe, dressed warmly. After all, this is quite normal for the two Irish ladies. Together, they float on the Shannon, hoping to reach the island. The Shannon is a 386-kilometer long river between east and west Ireland. And the river is quite large in some places, as we see in these images.

Their adventure would soon take a different turn than they had thought. And the reason would not be the water, but what was happening in the sky above them. Soon, the two are treated to a true and unexpected spectacle. It is late afternoon already, a time when small groups of starlings come together. And together, they ultimately make it a massive show. A spectacular phenomenon of nature follows.

Tens of thousands of birds fly through the air in group formation.  An impressive aerial spectacle is the result. The swarm grows and grows and suddenly does something very special. They seem to be dancing through the air! In a perfect choreography, they perform a true starling ballet. They swing through the air and continue moving further and further towards their sleeping place. It might be a group of trees in a park, a tall building or a vast field of reed.

And so, a huge black ‘sea of birds’ is created above the ladies’ heads and their canoe. Once it gets dark, they seem to literally ‘drop out of the sky’ and occupy their sleeping place. Until the very next morning, when they begin swirling around the region in smaller groups again. The beautiful video shows what that looks like. The swarm falls apart and comes back together within seconds. Beautiful, almost mathematical patterns form in the sky. Watch it in the video below:

How does a giraffe sleep?