The true story of the mysterious bike in the tree 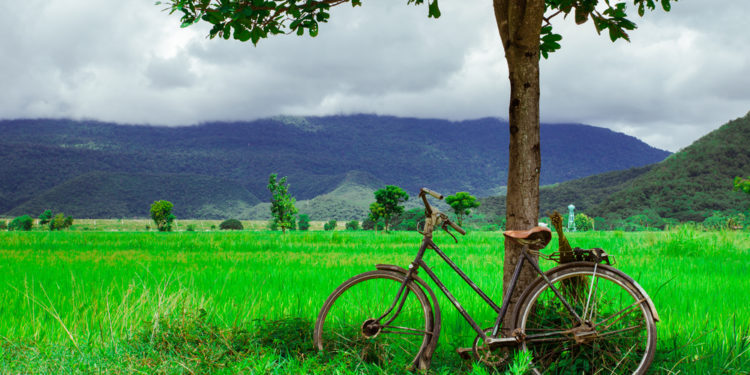 You may have seen a bizarre photo on the internet showing a child’s bike perched high up in the trunk of a tree. The bike protrudes from the tree’s mighty trunk, as though it’s being devoured.

But how exactly did the bike wind up in the tree, to begin with? The supposed story behind the strange photo is that a young man who lived on Vashon Island in Washington State left the bike chained to the tree in the forest before going off to serve in World War I. The story goes on to reveal that the young man never returned, and his heartbroken parents left the bike as a remembrance of their son. As the tree grew, it enveloped the bike, forever enshrining their son’s memory.

While it’s a heart-wrenching story, it’s just not true.

The tattered red bike actually belonged to Don Puz, a retired King County, Washington deputy sheriff. Puz grew up on the island and explained that community members donated various items to help his family get back on their feet after a devastating house fire killed Puz’s father and destroyed most of the family’s belongings.

Puz was less than thrilled about riding the bike, which was built long after World War I but was still far from desirable. he described it as having hard tires and skinny tricycle-like handlebars. “I was too big a kid to ride it,” he explained to the Vashon-Maury Island Beachcomber in a 2009 interview. Puz recalled that in 1954 he’d been out playing with friends, but since he’d been the only one riding a bike in the woods, he decided to ditch it so he could run off with the other kids. And there the bike remained, just a few hundred yards away from where he lived.

The former law enforcement officer isn’t quite ready to confess intentionally abandoning the bike but admits he wasn’t exactly sad to see it go missing. “Probably as much as I detested the little thing, I just gave it a toss and forgot about it, and then denied knowing where it was,” he told the Beachcomber.

And while the bike held little interest for Puz during his childhood, the rusty bike caught his attention as an adult when he went to visit his sister who lives on the island. she took him to see the bike in 1995 after wild stories about it began popping up in the media. As he looked up, Puz’s memories of the decrepit toy from his childhood immediately came flooding back. He immediately recognized the bike he’d once despised.

The bike is now ensnared in the tree’s trunk and elevated about 12 feet above the ground. University of Washington Biology professor Elizabeth Van Volkenburgh suspects someone happened upon the old bike, then placed it in a fork in the tree’s trunk years earlier. The tree’s trunk grew around the bike and as it became taller, it took the bike up higher and higher.

While Puz still doesn’t miss that old bike, it’s beloved by locals and even become a bit of a tourist attraction. It’s not unusual for community members to replace parts of the bike when they break or go missing, but it’s getting harder and harder to find equipment from the era when the bike was constructed.

The story of the boy who left to fight during WWI isn’t the only tall tale out there. Puz has heard other wild stories about the bike. The bike in the tree has also gained fame thanks to Bloom County cartoonist and writer Berke Breathed, who based his Christmas-themed children’s book, Red Ranger Came Calling, around a bike that’s perched in a tree.

The role trees play in saving the world