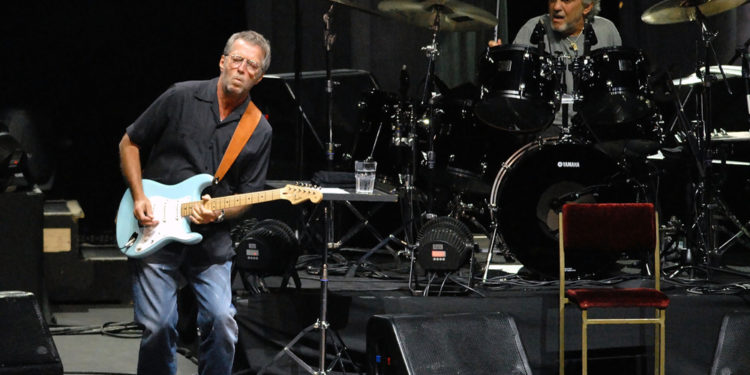 Eric’s mother, Patricia Molly Clapton, was just sixteen when she met and had a relationship with Eric’s father, Edward Walter Fryer. Fryer was a 24-year-old Canadian soldier posted in England during the end of World War II. To earn more money, Fryer would sing and play the piano at various clubs around where he was posted. He had been playing the piano and singing from the age of 14 when he ran away from his home. While being stationed in Surrey in 1944, he performed at a small pub, where he met Patricia, and she became pregnant with Eric Clapton.

Due to the social stigma attached to being a child born without marriage, and the various difficulties for a 16-year-old teenage girl in raising a child, Patricia’s mother and stepfather agreed to raise Eric as their son, and they told him that his mother was his sister.

When Eric Clapton was only a few years old, his birth mother, Patricia, married another Canadian military man, Frank MacDonald, and moved with him to Canada and for some time, they lived in Germany too. Even though she was now old enough to take care of Eric and raise, after her wedding, she still chose not to do so and continued to act like she was her sister.

But it wasn’t until he was nine years old when Patricia came to visit them, bringing along his six-year-old half-brother, at that time Eric was told the truth by his grandmother. Even after knowing the truth, he still continued to live with his grandparents, and he and his birth mother continued to act like brother and sister.

Clapton never got to meet his birth father, as Fryer died in 1985 because of leukemia, long before Clapton had found more information about him except his name, which his grandmother had told him.

Eric Clapton learned more about his father in 2007, thanks to a Montreal based journalist Michael Woloschuk, who had tracked down Fryer and his family. Eric Clapton found out that his father had been a traveling musician who played saxophone, piano and also sang. Fryer had relationships with many women during his travels and had many other children. It’s also said that his father never knew he had a famous musician son, or at the least, he never told anyone that he had a musician son if he knew.

Eric is the only person to be inducted to the Rock and Roll Hall of fame three times: once as a solo artist, then as a member of the Yard birds band and another band named Cream. Clapton is known as one of the most important and influential guitarists of all time.